An editor with St. Martin’s Press since 1971, Thomas Dunne started his imprint within the Press in 1986 and celebrated its 25th anniversary in 2011. A perennial blend of commercial success and quality, the Thomas Dunne Books list publishes broadly, with a reputation for publishing both established and emerging writers. 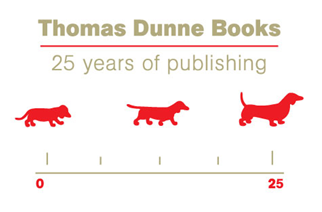 What’s with the Dog?

We’re often asked about the origin of our dachshund colophon. When it was decided to establish the Thomas Dunne imprint within St. Martin’s Press, the SMP art director asked what sort of designed type or logo Tom had in mind. He was thinking about this one night, and idly studying his bookshelf, when he noticed that a significant number of his books had critters of some sort on the spine. There were flocks of penguins among the paperbacks, but among hardcovers, a veritable dog track of Russian wolfhounds predominated. At the time, Tom’s dachshund, Sparky, was on his lap and the solution was suddenly obvious. The breed is lovable, humorous, brave and feisty. They are cleaner than penguins, and—let’s face it—if one were to curl up with a good book and a good dog, which would be more congenial, lap-wise: a hundred-ten pound wolf-hound or a nine pound dachshund? The answer was obvious, and though we’ve never actually counted, at least ten million “Sparkies” have gone out into the world since 1986.

“From a high-rise office at the very tip of the Flatiron building, Mr. Dunne remains firmly in charge. His imprint is the leading publisher of mysteries, but also sells histories, niche titles, British literary imports, and unauthorized biographies. An imprint that scorns snobbery, prizes the quirky and commercial, and flourishes…his imprint is one of the company’s most profitable.” —The New York Times

“High overhead has forced big publishers to take fewer chances on new writers, trim their lists of talented but modest-selling authors, and cut back on line-by-line editing of the works they publish. Another loss in the age of mega-publishing is a sense of the personality of each publishing line. Today a few imprints, such as Thomas Dunne Books/St. Martin’s Press, reflect the taste of a powerful editor. Otherwise, it is difficult to predict the type of reading you will get from books issued by a particular publishing house.” —The Boston Herald

I’ve been at St. Martin’s Press since January 1971, so at one time or another I have edited or published almost every kind of book. The TD imprint was started in 1986 and remains intentionally eclectic. While our focus nowadays is more on “big” properties, we still relish publishing smaller, high quality titles in both fiction and non-fiction. In recent months we have had bestsellers from Senator Bernie Sanders (Our Revolution), Gov. John Kasich (Two Paths) and William Shatner (Leonard), as well as Dr. Henry Marsh’s medical memoir, Do No Harm. Several dozen other titles did not make “the List,” but just about all were well received by reviewers and performed well. Like every other publisher, we love to have bestsellers, but we are open to beautiful or provocative writing on any topic.

Over the years, many of my personal “hits” have come from the UK. These have included Rosamunde Pilcher, Wilbur Smith, Frederick Forsyth, Madeleine Wickham (aka Sophie Kinsella), and Python Michael Palin. And we launched the careers of literary novelists such as Jincy Willett as well as commercial novelists like Dan Brown.

I personally have a particular interest in history (as with Peter Ackroyd’s five volume history of England), biography (such as Barbara Leaming’s bestseller, Jacqueline Bouvier Kennedy Onassis: The Untold Story) and public affairs (like Pulitzer Prize–winner Michael D’Antonio’s definitive biography of Donald Trump, Never Enough). In recent fiction, we have launched the career of Viola Shipman’s moving family stories, beginning with The Charm Bracelet, and continue to publish a bunch of fine mysteries. Coming soon will be the first novel in NBC’s Martin Fletcher’s trilogy of Israel from 1948 to the present, and a number of other fine storytellers.

In short, while we have trimmed back just a little to 30-35 titles a year, we are very much looking for talented writers of commercial or literary merit who are seeking for an enthusiastic and seasoned publisher.

I’ve been with Thomas Dunne Books since December 2016. I would describe our books as sometimes high-brow, sometimes low-brow, always brilliant, never despicable.

We specialize in political books, especially crash titles, such as the NY Times bestsellers Two Paths by John Kasich, The Dangerous Case of Donald Trump by Bandy Lee, Team of Vipers by Cliff Sims, and Beyond Charlottesville by Terry McAuliffe, as well as Where We Go From Here by Bernie Sanders and The Shadow President: The Truth About Mike Pence by Michael D’Antonio and Peter Eisner. Michael and Peter are currently writing a major book on the impeachment trial based on extensive insider access.

We also do serious history and current affairs titles. President Carter: The White House Years by Stuart E. Eizenstat is one of the most important books I’ve ever worked on. We’ll publish Susan Eisenhower’s book How Ike Led and reporter Ryan Dezember’s Underwater, a book on the housing crisis, in Summer 2020, and I’m currently working with former Speaker John Boehner, former Congresswoman Jane Harman and former Australian PM Kevin Rudd on their books.

I’ve worked on science titles for my entire career, so I enjoyed editing Jonathan Rauch’s The Happiness Curve, which is revising how we think about midlife, and Jeff Nesbit’s This Is the Way the World Ends, which shows how all the disparate elements of climate change are converging on America. I’m looking forward to publishing John Della Volpe’s book on Gen Z.

It’s not all serious, though. I don’t use this word a lot, but I have to say Ramin Setoodeh’s NY Times bestseller The Ladies of the View is scrumptious in its gossipy details. We had to embargo it because every sentence is a publicity bullet. In that vein we’re also doing a book on the Marvel Cinematic Universe by Christopher Lee and Geoff Boucher called Avengers Assemble.

Our fiction list isn’t as large, but it’s very solid, including Anne Griffin’s debut When All Is Said, which was the #1 book in Ireland and nearly a Goodreads finalist in two categories; Carnegie Hill by Jonathan Vatner and the forthcoming Safecracker by Ryan Wick. I’d love to do more fiction, specifically science fiction for the non-science fiction audience.

I joined the Thomas Dunne Books team in March 2019, after first starting at St. Martin’s Press in August 2016. Prior to that, I graduated from Marquette University and completed the Columbia Publishing Course.

On the fiction side, I’m excited to read upmarket/book club fiction, smart mysteries and thrillers, historical fiction, and rom-coms. I love voice-driven writing and stories that explore friendships and family dynamics. I’m typically drawn in by great characters and a commercial hook. In my time at Thomas Dunne Books, I’ve been lucky to work with novelists Jonathan Vatner (Carnegie Hill), Ryan Wick (Safecracker), Nancy E. Turner (Light Changes Everything), and Anne Griffin (When All Is Said).

For nonfiction, I’m most interested in reading narrative nonfiction by journalists or in the area of pop culture. I’ve especially enjoyed working on books by Ryan Dezember (Underwater), Susan Eisenhower (How Ike Led), and Ramin Setoodeh (Ladies Who Punch).

I joined Thomas Dunne Books in September 2019. I was instantly enamored with the wide variety and accessibility of our list, and especially our unwavering devotion to publishing fact-based, thoughtful nonfiction.

My publishing career began shortly after attending the Columbia Publishing Course, when I joined legendary children’s book editors Anne Schwartz and Lee Wade at Schwartz & Wade Books, an imprint of Random House Children’s Books. After a few years of time and thought, I found I most connected with the biographies and socially conscious manuscripts on which I worked. Eventually, this passion for nonfiction led me to Thomas Dunne Books.

Though I try my best not to pigeonhole my tastes in fear of missing out on a great story, I am most interested in modern history and current affairs titles. A few of the books I’m particularly proud to have worked on are Ticking Clock by renowned producer Ira Rosen, a tell-all memoir of his decades at 60 Minutes; High Crimes by New York Times bestsellers Michael D’Antonio and Peter Eisner, a deep dive into the events leading up to the Trump impeachment; and Trial By Fire by Emmy Award–winner Scott James, a feverishly researched exposé of corruption and misinformation following the 2003 Station Nightclub fire.

As for fiction, I particularly enjoy mysteries and thrillers. For instance, Harald Gilber’s Germania takes the classic “race against the killer” detective novel and turns it on its head, loosing a Jack-the-Ripper-style killer onto the crumbling streets of Nazi Berlin at the fall of the Reich. The anxiety is palpable.

At the end of the day, I like compelling, character-driven stories that comment on the human condition and effect change. I want to work with talented writers with authentic stories to tell, and build relationships that last for years and books to come.